Ok Phansa is the day when the monks' rain retreat in their monastery or temple ends. Literally 'ok' means going out or leaving (of the period). Read more about the Phansa and the beginning of that period: Asalha Puja & Khao Phansa.

The texts from the Theravada tradition describe that the Buddha spent his 7th rain retreat in the Tavatimsa Heaven (Pali: 'of the thirty three' [= of all gods]) to teach the (Abhi) Dhamma to his mother Mayadevi who had died 7 days after his birth. The day of his descent from heaven to earth is Ok Phansa Day. His return was in the company of gods and brahmas down three steps of gold, silver and jewels respectively. Buddha is called the devatidata (Pali: god among the gods), with the other (Indian) deities as his disciples. Buddha returned to earth at the city gate of Sankasha (city in India, Uttar Pradesh), where he was met by a crowd of followers who came to offer him food. 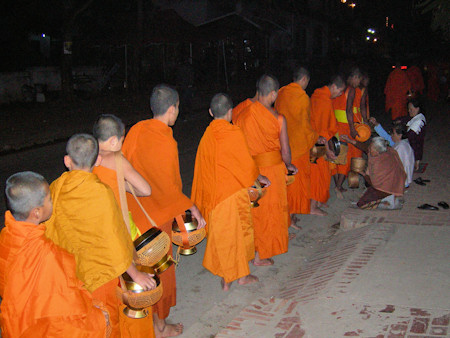 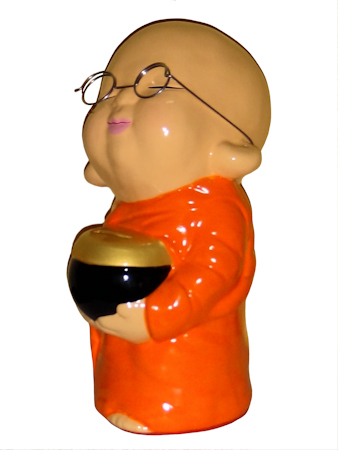 In memory of the event, the Buddhists celebrate the end of the rainy season as a special holiday and give alms called tak bat devorohana, or the alms given (tak: create; bat: alms bowl) after descending (rohana) from the gods (from the world of the gods: devo; Thai: Thewalohk เทวโลก).

While the Buddha stood there on the stairs of jewels, the heavenly world of the gods and brahmas, the world of hell and the world of men were simultaneously revealed and visible to each other. This is called 'the opening of the worlds by Buddha'.

Commentators explain this so that Buddhahood (in a broader sense) and the effects of good and evil karma on the beings of all worlds became "visible" and that Buddhahood can be pursued by all.

 An exceptional Tak Bat Devo festival that evokes the atmosphere of Buddhist myth is organized annually in Thailand, Uthai Thani, at Wat Sangkat Rattana Khiri at the top of Sakaekrang mountain. A large crowd of Buddhists from all over the country come to participate.

 At the end of the rain retreat in October, boat festivals and boat races take place in many places in Laos and Thailand, especially on the major rivers Mekong, Nan and Chao-Phraya. In Isaan in Nakhon Phanom on the Mekong and in Ubon Ratchathani on the Mun. Long-boat racing is a Thai tradition dating back more than 600 years. Some festivals can be found in Ayuthaya, Phichit, Phitsanulok and Narathiwat. This in Phra Pradaeng in Samut Prakan has been going on for 100 years. Also famous is the Chumphon Traditional Boat Racing.