During the Magha Puja, the Buddhists commemorate that 1,250 saints, Sadhoes, came to the Buddha from all over the country in the city of Rajagaha. This name came about because the Sadhus went to Rajagaha at the full moon in the month of Magha. The Sadhus became followers of the Buddha and were all ordained monks by Buddha himself. This created the first Buddhist monk community, called the Sangha. 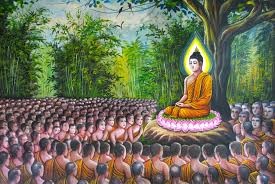