Loy Krathong is not a public holiday, but it is the most popular Thai festival of light and water, celebrated every year on the full moon in the 12th lunar month (usually November). In Northern Thailand, Loy Krathong coincides with the Pi Yeng festival, known for the (khom loi) lantern festival (with the release of paper lanterns / lanterns / hot air balloons). 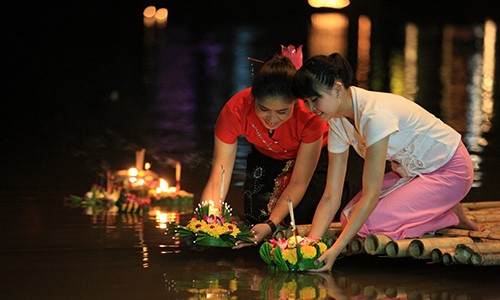 Historically it is not entirely clear what the origin of Loy Krathong is. Possibly it goes back to an old Indian festival because it is associated with the water goddess Phra Mae Khongkha, whose name refers to the Indian Ganges. There are other ancient customs (Haripunchai, Khmer, etc.) that may have played a role. Popular legend has it that in the Sukhothai period, Nang Nopamas, a consort of the Thai king, was the first to place a decorated raft on a water in worship of the water goddess. We speak here of a legend because there is no historical evidence and it is suggested that the story is an invention from the beginning of the 19th century. According to a text by Rama IV, the original usage was adapted for a Buddhist-inspired celebration and commemoration of Buddhist events.

Loy means to float and krathong is the raft that is placed on the water. The krathong are made of natural materials: bread, banana leaf and bark, flowers, etc. with candles and incense sticks. Normally they are small, but exceptionally large and impressively decorated copies of official bodies and organizations exist. (In some places, the use of styrofoam and similar materials that pollute the environment is prohibited by law.) The krathong is placed on the water and with the ceremonial guidance of the Buddhist monks it floats away. Symbolically, the vessel carries with it unpleasant aspects and negative feelings of the person and thus ensures future happiness. In popular belief the water goddess is still revered and thanked for her benefits. For couples, the krathong's behavior is meaningful to their happy relationship. The name Nopamas lives on in the Nang Nopamas competitions or Miss Krathong pageants of a beauty queen that are held. She was considered a symbol of goodness, beauty and intelligence, the perfect woman ... At the end of the rainy season, the water is high in rivers and klongs. Since the 17th century, "long" boat competitions have been organized on the major rivers, some of the largest taking place in Ayutthaya, Phichit, Phitsanulok and Narathiwat. The temples are often the centers of activity (see photo). Above all, there is a lot of fun, with parades and fireworks and everywhere the Loy Krathonglied sounds that ends with the message: (Buddhist) merit brings happiness.